A Tuscan Tradition: the

The true spirit of the Christmas season, the Holy Family

The Nativity is a tradition that celebrates the very origins of the Christian holidays, the physical representation of the birth of the "bambino Gesù" or baby Jesus on December 25th. The Italian word for Nativity scene or creche/crib is "presepe", and it is here in Italy that the tradition of representing the Holy Family at Christmas became popular. 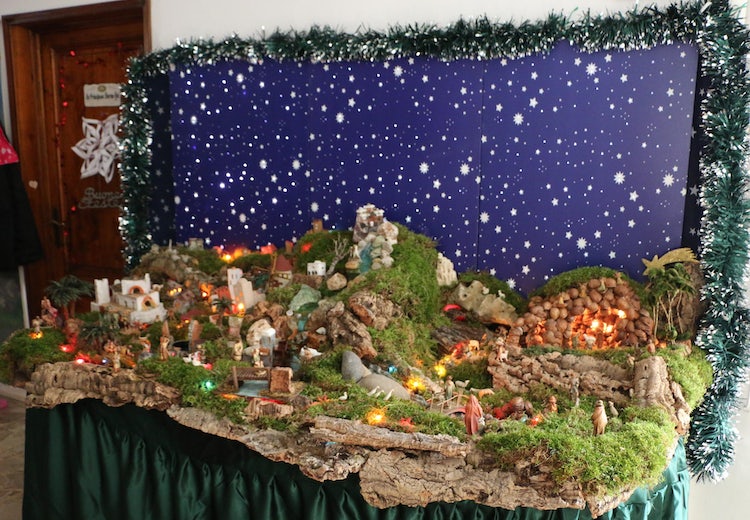 Though Nativity scenes in themselves vary as to size, material they are built with, even the number of elements, people, animals, dress, and activities that are figured, the main concept is always the same: Mary, Joseph and baby Jesus plus an angel presiding over everything, an ox and a donkey are added to the scene. Sometimes it is located in a manger, sometimes in a cave, and sometimes with shepherds. Frequently, the three wise men are on the journey somewhere in the scene, and arrive by the manger by January 6th, on the day of the Epiphany.

Another common variation is, of course, a "live" presepe, a solemn event where real people dress and pose in "character and parade through the city streets before establishing themselves in a prepared stable or cave."

Both of these traditions are very much alive during the holiday season here in Tuscany, especially in the period between the 25th of December and the 6th of January.

Where did it all Start? Bethlehem, of course

The earliest re-enactment of the nativity scene we have on record is that of Saint Francis, who spent quite a bit of time in Tuscany. After having visited Bethlehem, he was compelled to ask the Pope for special permission to recreate the nativity scene, thus offering us the first "presepe vivente". It was set in a cave, with only a manger, straw, a cow and a donkey; San Francesco celebrated Christmas in 1223 in the small town of Greccio, where today is the Santuario di Greccio, or Sanctuary.

Shortly thereafter, we have a 3D representation by Arnolfo di Cambio, the man responsible for Palazzo Vecchio, the Castle in Poppi as well as many other pieces of artwork) as can be seen in the Museo del Duomo and the Uffizi.

Arnolfo's Nativity was commissioned by Pope Niccolò V with the idea to imitate that which San Francesco created in Greccio. It started as a "basso rilievo" or bas-relief (attached to a wall or stone slab) and over the years was re-worked by other artists to give it a "tutto tondo" look, meaning a stand alone sculpture look. It can now be seen at Santa Maria Maggiore in Rome (photo below). 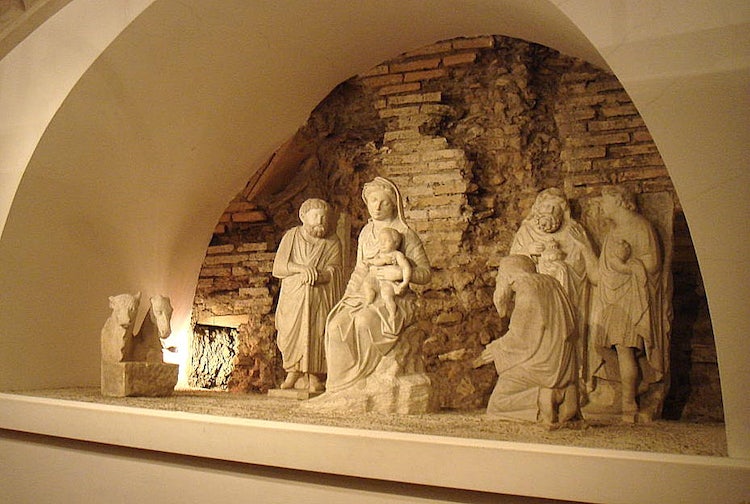 In 2014, the association "Terre di Presepe" (Land the Nativity Scenes) was formed and organized a network of towns and cities creating a database of sorts, uniting the prettiest creations of the nativity scene, incorporating them in an itinerary of art and culture from places all over Tuscany. The website is only in Italian, but it provides a detailed list of places to visit and the types of Nativity Scenes you can expect to find.

Where to find these amazing Nativity scenes

In Tuscany, you are bound to find a presepe in every church you visit, many times you will note that the manger or crib remains empty... which makes sense since baby Jesus has not yet been born! Only on the night of the 24th of December is the baby placed into the Nativity. Some places go beyond mere decoration and pour heart and soul into creating an image that will express all their emotions during this very special time of the year. These make for great Nativities to go visit and study, noting all the particulars and details.

We have assembled a guide of some our favorite Nativity scenes to visit across Tuscany. We will be adding to it as we discover new ones; if you have any special places you enjoy, just let us know as we are always happy to share!

Note that most Nativity scenes are in place by December 8th and are up until January 6th (we will note those with different dates below). 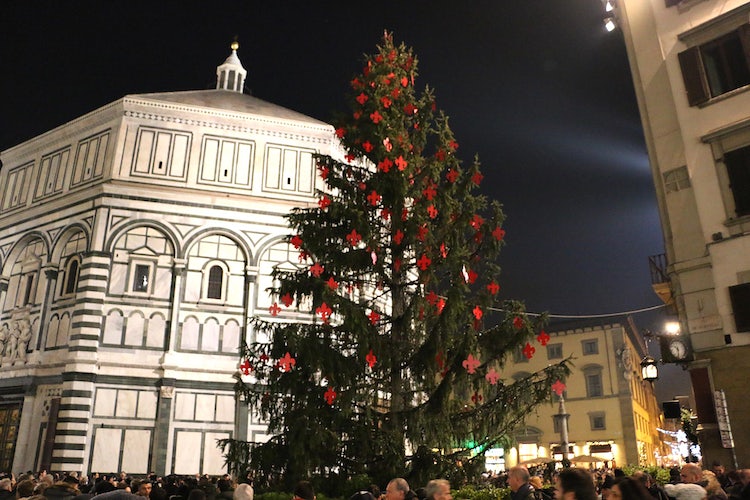 A life-size nativity scene made of terracotta, with another Nativity scene inside the cathedral as well from December 14th. On the Epiphany, the Three Wise Men arrive in procession to the presepe outside and it becomes a live-presepe for the duration of the ceremony.

Where: on the in front of the Duomo 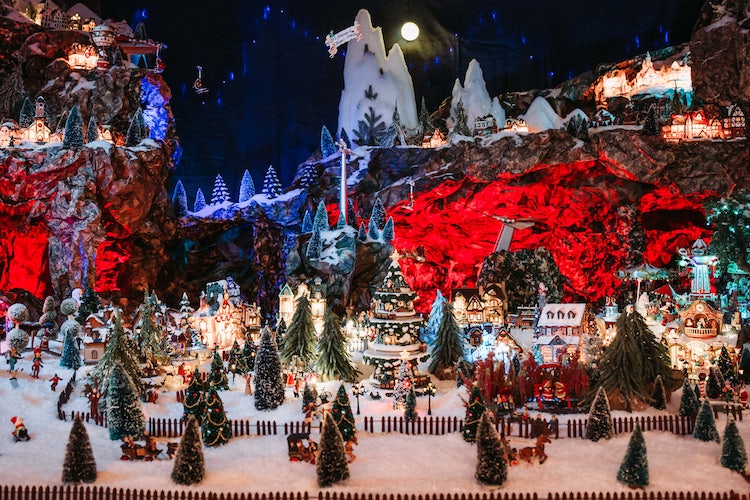 30 nativity scenes by artists, plus a Santa's village, free entrance, open every day from 11am to 11pm. Donations accepted for the Fondazione Tommasino Bacciotti. Several of the scenes incorporate present day situations, to remind us to be kind to each other and to those in need.

Where: in the hotel's lobby and meeting rooms

On Epiphany, the most voted wins a prize.

Where: across the city streets 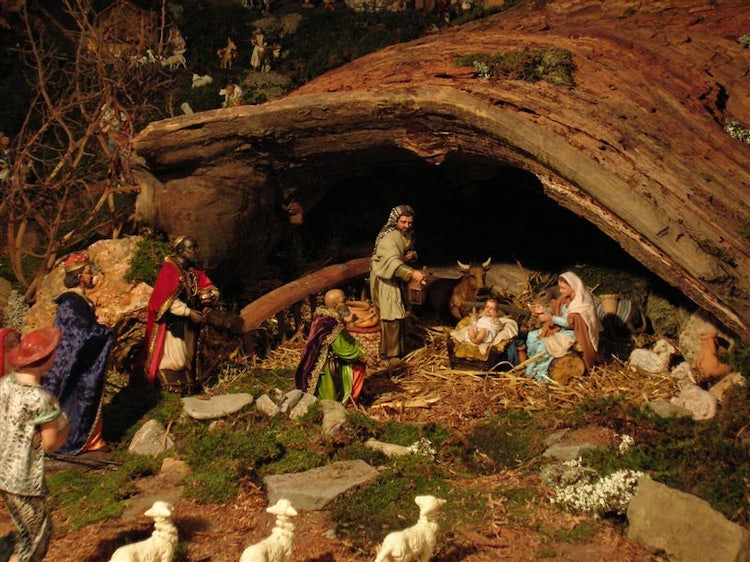 Volunteers take over a month to set up this mechanical nativity scene which will enchant young and old alike!

from the young at heart

Check out the official site 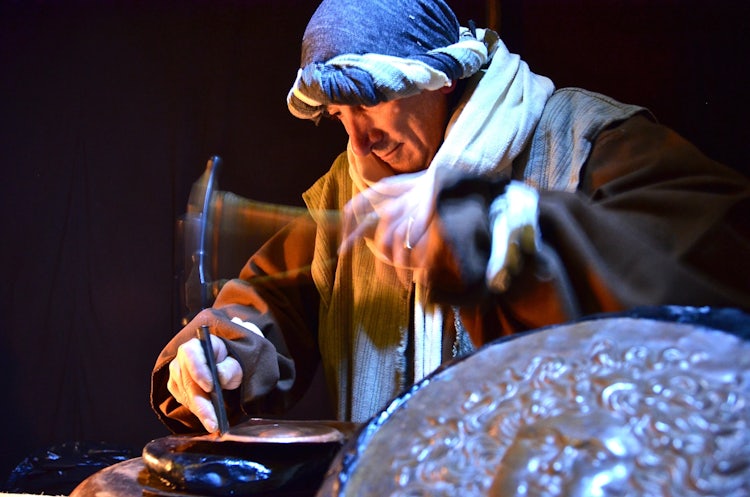 Where: Le Ville is a small hamlet between Arezzo and Monterchi

Check out the official site 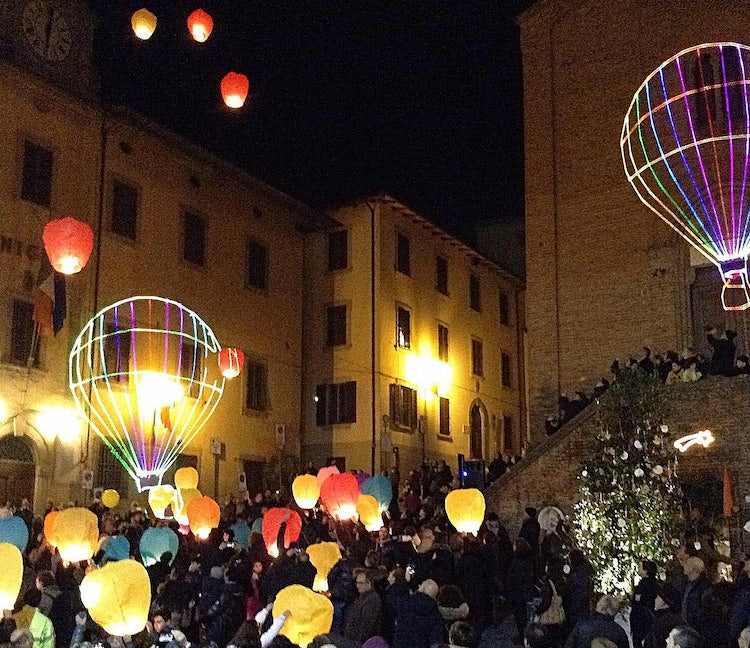 In 2019, the city celebrates 10 years of nativity scenes with over 70 scenes across town.

Where: in the city streets

Check out their Facebok page

Pisa | MUSEO DEL PRESEPE | until end of January, rest of the year with booking

A truly unique museum with a message of peace with a historical collection of Nativity scenes. 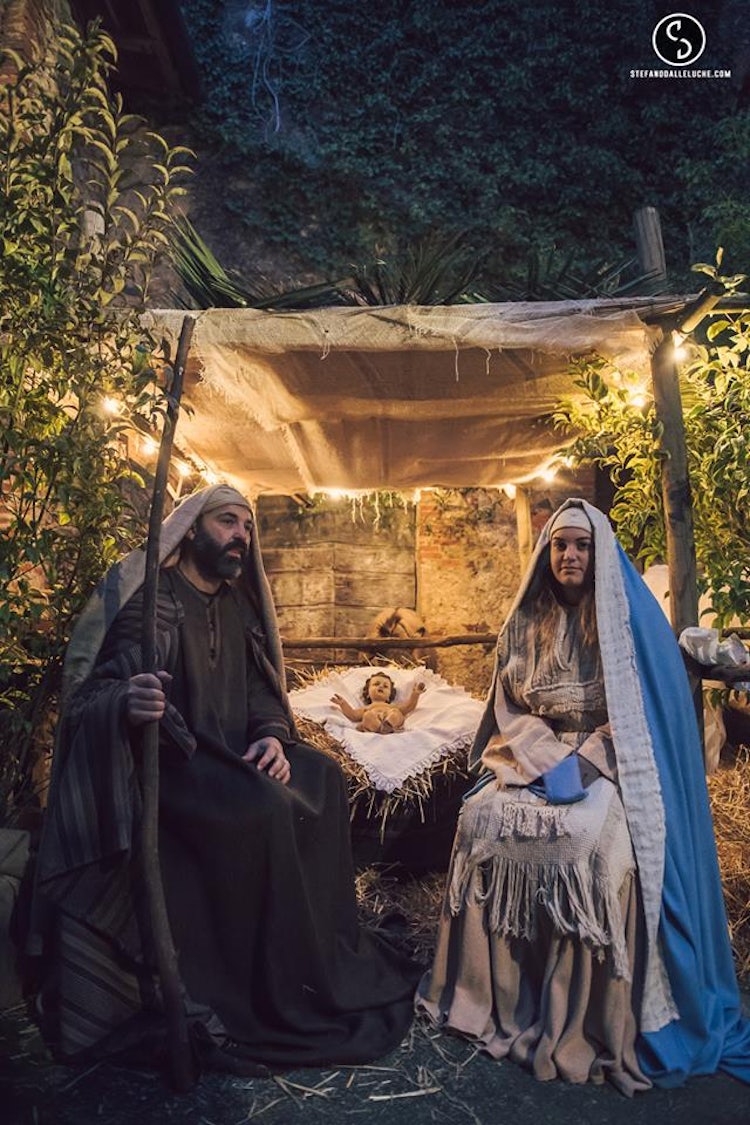 The non-profit event takes place in Nocchi, a small town near Camaiore (LU) on Boxing Day, which is the feast day for St. Stephen (December 26, 2019) from 2pm to 8pm.  It is a live representation of the Nativity, taking visitors back in the past to the crafts, habits and traditions of the first half of the 19th century in which the Nativity scene is set. Entrance is free, including the free bus shuttle from the parking area set up as you near the town. 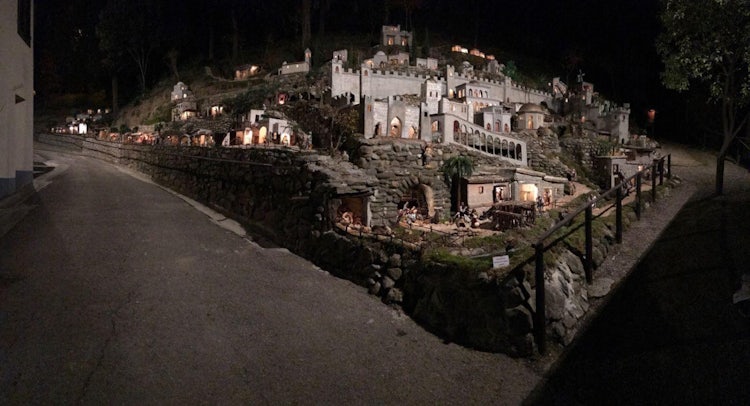 A mechanical stage for this nativity scene

Pistoia | PRESEPE INSIDE THE CATHEDRAL 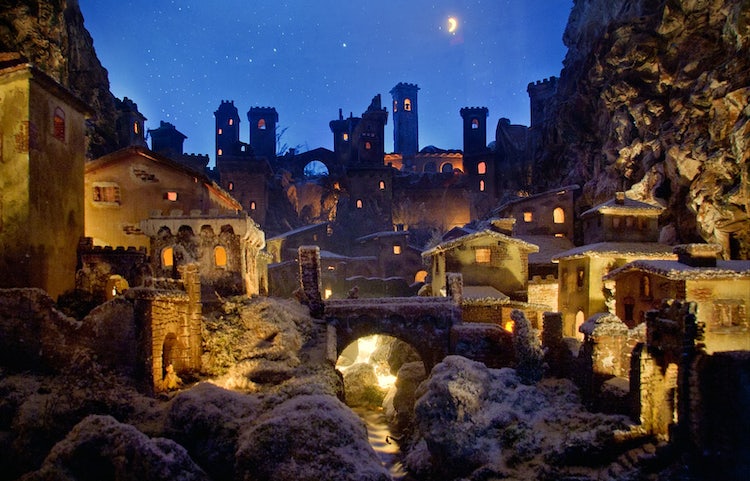 a tradition for more than 25 years

Where: Badia di San Fedele
Times: everyday when the church is open. There are several to visit in this little town within walking distance of one another: the Badia di San Fedele and then right down the street over the Post Office is a life size nativity Scene, then the Church of Ponte a Poppi, the Church of Certomondo, Presepe dei Cappuccini di Ponte a Poppi, and with a short trip in the car, the church of Lierna. Most are open from Christmas until Epiphany but the one in San Fedele is larger and takes a lot of work to set up, so remains open until the end of January. 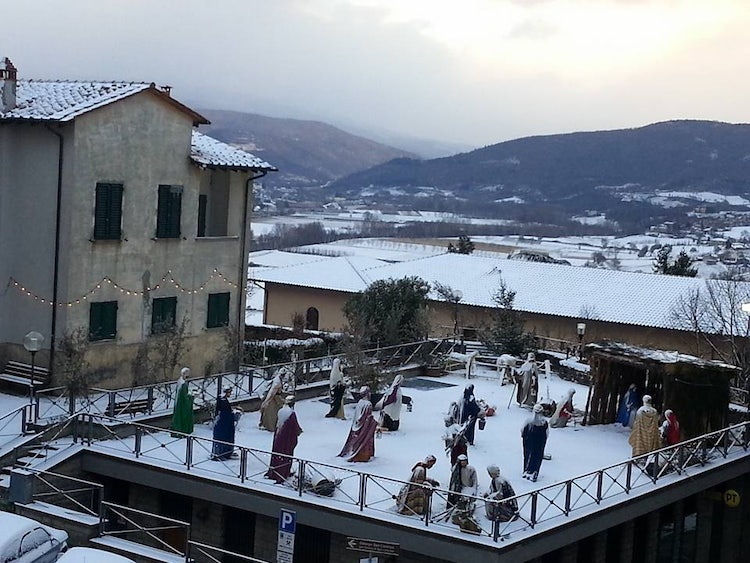