The tradition of lighting the city with candles dates back to 1688. In that year, the urn containing the remains of Saint Ranieri was placed in the Cappella dell'Incoronata in the cathedral, which is now dedicated to saint. Cosimo III of the Medici wanted the antique urn that contained the saint's remains to be substituted with a more sumptuous and modern urn. The change was occassion for a memorable city feast and according to tradition, the Luminara, or "illumination" as it was called back then, was born. The event has been held every year since then except for a few interruptions.

Bonfires and candles to light up the city were used even before then as a way to celebrate a special event, such as that to celebrate the visit to the city of Margherita Luisa, princess of Orleans and wife to Cosimo II in 1662.  Today the celebration has taken a specific form: the architectural details of the palaces, churches, towers and bridges along the Arno (windows, cornices, balconies) are recreated with white wooden frames. 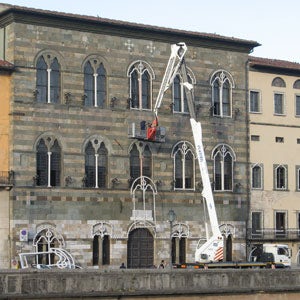 These frames are fitted onto the buildings and on these frames candles are attached and lit after sunset.

Over 70,000 "lumini" (how candles are called in Italian when they are inside a container, glass in this case) burn and reflect on the river. Some candles are also floated on the waters of the Arno. The city along the lungarno simply glows. The only additional areas in the city lit up aside from those along the river are the battlements on the section of city walls that surround Piazza dei Miracoli and the Leaning Tower itself, where oil lamps show off the tower's shape.

Around 11 p.m. a fireworks show from the Cittadella Vecchia (old citadel) can be best enjoyed from along the river. A word of warning: the city streets can get very crowded, most of the university students are out enjoying themselves adding a bit to the confusion. We found taking side streets away from the main Corso Italia and Piazza Garibaldi/Borgo Stretto to be a good idea to avoid getting crushed in the crowds.

View photos of Pisa and the Luminara! »