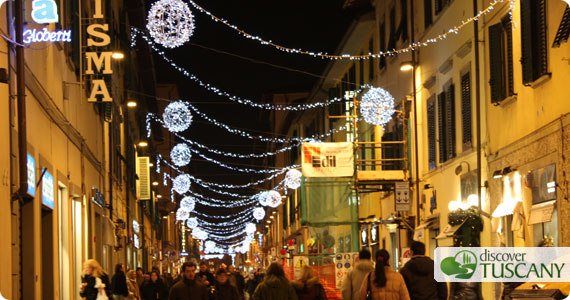 Wow! Today is December 1st and the countdown for Christmas has started! Florence has been lighted up with thousands of Christmas lights all around the city. As usual during the Advent there are several Christmas markets and lots of events all around Tuscany.

Florence:
From December 4th to 12th at Leopolda Station there will take place the annual fair about Christmas,  Florence Noël.
In Piazza Santa Croce will start today the classic German Christmas Market, that will go on until December 20th from 10.00am to 8.00pm every day.

Added Dec. 10: We just learned there is another Christmas market called Mercanatale on December 12 and 19, in Piazza Tasso at the Leopoldine where you can buy food products made by local producers, including just pressed extra virgin olive oil. Take the best of Tuscany back with you by being direct from the farmer! From mid-morning to late afternoon.

Chianti:
On December 8th,12th and 19th in the particularly shaped Piazza Matteotti in Greve in Chianti there will be the Christmas market.
In Gaiole in Chianti the markets will be on December 5th and 8th from 10.00am to 7.00pm in Piazza Ricasoli.

Pisa and Lucca:
In the historical center of Pisa the Christmas market will take place under the Logge di Banchi and in Largo Ciro Menotti every day from 9.00am to 12.00am until December 24th.
In Piazza della Cittadella and Via di Poggio in Lucca center there will be a Medieval Christmas market from December 10th to 12th.

Lunigiana:
In Fivizzano the market will take place on December 4th,5th and 8th, while in Aulla it will be on December 18th and 19th.
In Pontremoli and surroundings there will be on display several beautiful nativity scenes from December 19th to January 9th.

Pistoia, surroundings and Montagna Pistoiese:
From December 4th to January 9th in Pescia there will lots of events related to Christmas that you can check on the Italian website http://www.vaiinduomo.com/. There will also be the Christmas market in Piazza della Maddalena.
In Pistoia under the Galleria Nazionale the market will take place from December 7th to 12th from 9.00am to 8.00pm.
On the mountains in Cutigliano from December 4th to 12th there will be Christmas Slow, a special event combining together the slow food and Christmas market. In addition there will be organized a special nativities’ itinerary.