The Tuscan Sun Festival 2012 this year in Florence! 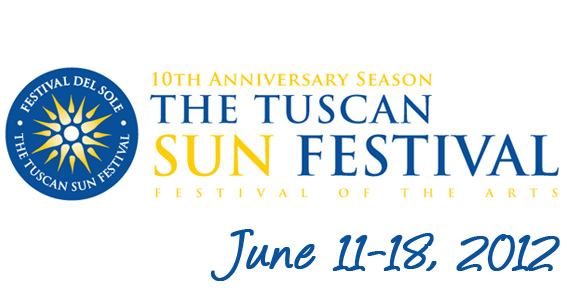 This year in its tenth edition the prestigious Tuscan Sun Festival takes place between June 11-18th in Florence. Inaugurated in 2003, it is considered one of the most important cultural summer events in Tuscany. For the first time, it moves out of its original site in Cortona to Florence, the emblem of the Renaissance in the world.

As its creators define it, the Tuscan Sun Festival represents a “lifestyle festival”, or rather a event which celebrates arts in all its expressions, from music to theatre, from ballet to cuisine and oenology.

Enjoy the festival’s series of concerts by international artists of world renown and many various other types of events!

There are many important names among the artists performing at the Tuscan Sun Festival, these are just to mention a few: the soprano Angela Gheorghiu, considered one of the most gifted opera singers in the current musical scenario, the award-winning trumpeter Sergei Nakariakovil, the pianist Valentina Lisitsa, the cellist Nina Kotova, the flautist Sir James Galway, Maestro Pogorelich, the mezzo-soprano Susan Graham, the classical violinist Nigel Kennedy and, to finish, John Malkovich and the Technobohemians.

The Fiesole’s Music School, considered one of the most prestigious music schools in Europe, will perform The Sunset Concert with an orchestra composed of its young students (from 10 to 17 year olds). Funds from the concert will go to the training of their young talented musicians.

The Festival will close with “The 24 Hour Plays” during which 4 short plays are presented in the arch of 24 hours. The event includes also the involvement of a special guest like Tony Bennett.

During the festival, you can also visit the exhibition dedicated to the impressionists, Americans in Florence, where you’ll find paintings from the end of the 19th century and the beginning of the 20th century which present the relationship between the New and Old World, 500 years after the death of Amerigo Vespucci.

In the land of the wine and food par excellence, 5 Italian chefs of worldwide renown will propose unconventional recipes and reinvent traditional dishes of which Italy has been the master since generations.
The chefs will display their exclusive and new creations at the J. K. Place Restaurant and at the Four Seasons Hotel in the center of Florence.

Within a multifaceted festival such as this one, a special section dedicated to cinema could not be missing!
From June 3 to 17 at the Odeon Cinema a series of international cult movies will be screened, including a documentary on Woody Allen, Ripley’s Game, The World Before Her and many others…

You can buy your tickets between 10.00-18.00 Monday through Saturday at the Box Office, Via delle Vecchie Carceri, 1 Firenze. To make online booking requests and request information, email: tickets@boxofficetoscana.it