Come to learn about the battle, but stay to enjoy the beauty

In the sleepy little town of Anghiari, where you will find tranquil cobbled stone streets and lovely little shops, it is hard to imagine that it was the stage for one of the more decisive battles of the 1400's, defining the borders which are still in place even today.

The Battle of Anghiari was crucial in the history of "lower" Tuscany because when the Duke of Milan abandoned the area after his defeat, it was possible for the Florentines to take advantage and fortify their dominion in the area. This was considered a definite victory for Florence, solidifying their control in this area of the peninsula.

A Small Town in Tuscany

The medieval hilltop town of Anghiari, located in the province of Arezzo, was at the center of a famous battle when Florentine troops, supported by the Pope, fought against the Milanese army which had recently conquered San Sepolcro and wanted to expand the possessions of the Duke of Milan in Tuscany.

On the 29th of June 1440, the two armies led respectively by Michelotto Attendolo and Giampaolo Orsini and by the famous Niccolò Piccinino, faced each other in the valley under Anghiari (today still called the "the valley of the battle"). The battle was decided at the end of the day with the victory of the Florentines army.

The battle was short and not too violent, so much so that Niccolò Machiavelli wrote ironically that only one soldier died on that day and that was because he fell off his horse. 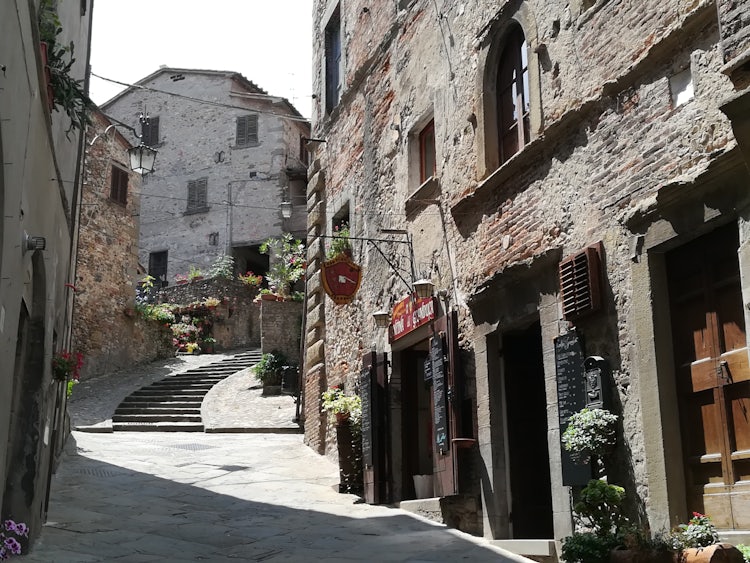 Anghiari: A Moment in Time

Recently nominated as one of the “Prettiest Little Towns in Italy”, Anghiari has revitalized the small city center with shops and restaurants, many of which specialize in local products and foods, like truffles and mushrooms. The narrow cobble-stoned roads, stairs, and buildings have been restored and create an inviting setting for the many festivals, musical events and street parties held throughout the year.

If you happen upon the town during one of its quiet moments, the mystical silence of the “vias” alludes to its simplicity and natural beauty both within the stone walls and beyond, overlooking the unique valley towards Sansepolcro.

The town walls that protect Anghiari, seem to protect it from the passage of time, the winding roads which slowly climb from the piazza to the top of the hill, hold a small treasure trove of sites to see. Spectacular is the road that climbs directly from the valley to the hilltop, a straight line with a steep 13% incline! 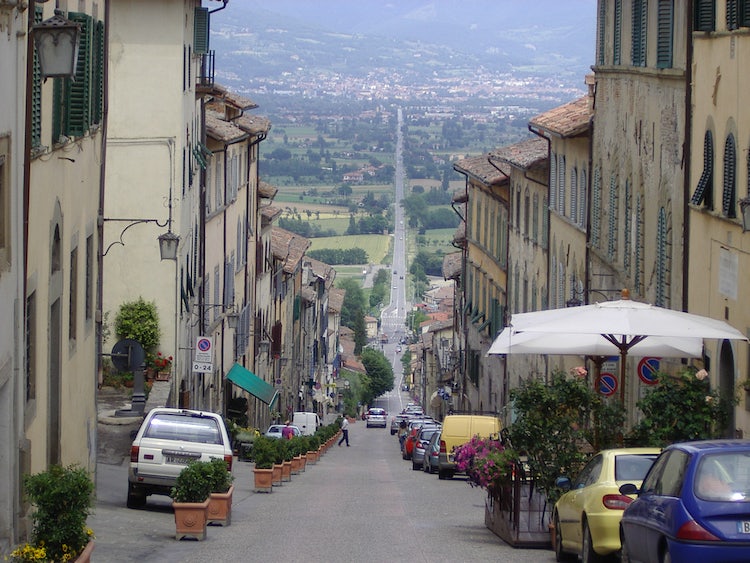 Palazzo Petrorio has been identified as a VII century Lombard castle which was actually built on pre-existing Roman ruins and is thus in the oldest part of the town. Today it has a façade decorated with coats of arms of various vicars and podestà that succeeded in justice administration on behalf of the Florentine government.

Next to the Palazzo Petrorio is the Garden of the Vicar, it is not just a coffee bar/restaurant with a spectacular view of the valley but a part of the history of Anghiari.

Piazza Baldaccio and the Galleria Magi are in the main square at the base of the city and are named after  warriors from the famous battle. On the road that separates the Piazza from the “Galleria di Magi” you will have a truly unique perspective of the valley, giving you the idea of just how high you are (800 meters) in a landscape that appears to be completely flat (except for the hill where you are standing). The modern arcade next to the square was built in the late 1800’s to house the weekly market and it now serves as a connection between the new and old parts of town. 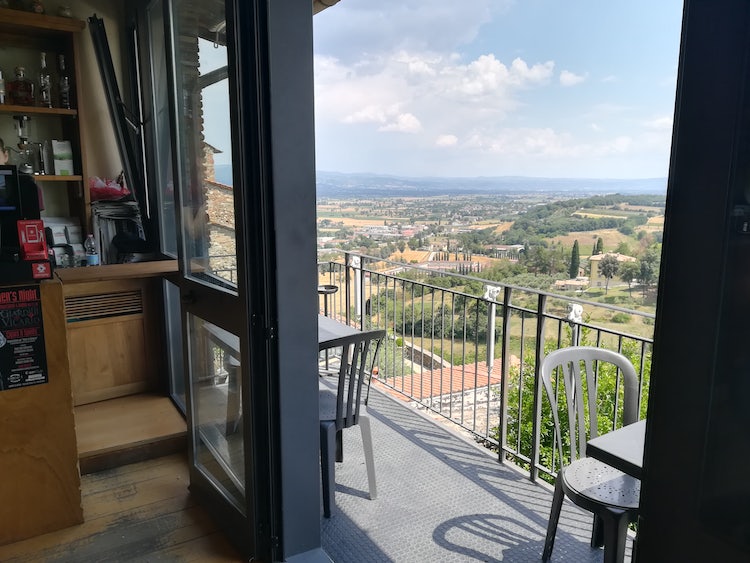 Palazzo Taglieschi, a composition of medieval towers pulled together to create the renaissance style home of the Taglieschi family in the mid-1400’s, has been transformed into a museum which highlights the culture of the Valtiberina valley of special note are works by Jacopo della Quercia and Andrea della Robbia.

Directly in front of the above-mentioned building is Palazzo del Marzocco, also called the Palace of the Battle. Set on three floors, the museum tells the story of the valley and its relationship to the Tiber River, as well as cataloging several remains from excavation points throughout the city. The top floor concentrates on the battle, including a diorama of the battle. 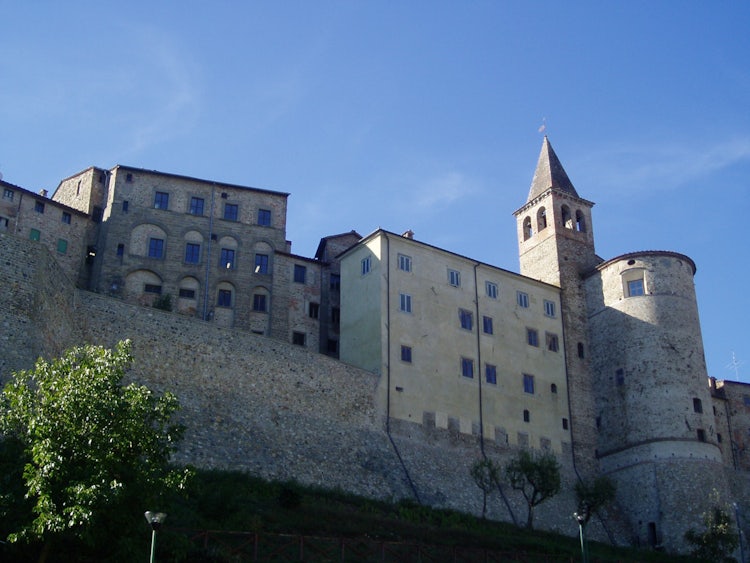 The Battle of Anghiari Fresco by Leonardo da Vinci

Though the victory of the Battle of Anghiari was extremely important for the Florentines, strangely enough, what has left its mark, even more, is the “lost” fresco commissioned almost 70 years later; the artist was Leonardo da Vinci. The idea was to decorate the main room in Palazzo della Signoria, today it is known as Palazzo Vecchio. Leonardo designed a large fresco depicting the battle that would be placed on the right wall in the present Hall of the Five Hundred (Salone del Cinquecento).

Taking inspiration from some works by Plinio the Elder, Leonardo decided to paint the fresco using the encaustic painting technique. This technique is also known as hot wax painting and uses heated beeswax to which colored pigments are added. Leonardo set up big braziers under his fresco to create the work.

Unfortunately, the procedure didn't have the expected result: the heat couldn't be spread out evenly over the fresco and, probably because of its large dimensions, the artwork was irreparably damaged.

Even so, the fresco of the Battle of Anghiari remained visible for several years and many painters, such as Rubens, reproduced it. Thanks to these copies there is evidence of the grandeur of this magnificent work by Leonardo which was eventually replaced after the Hall's transformation carried out by Vasari between 1555 and 1572. 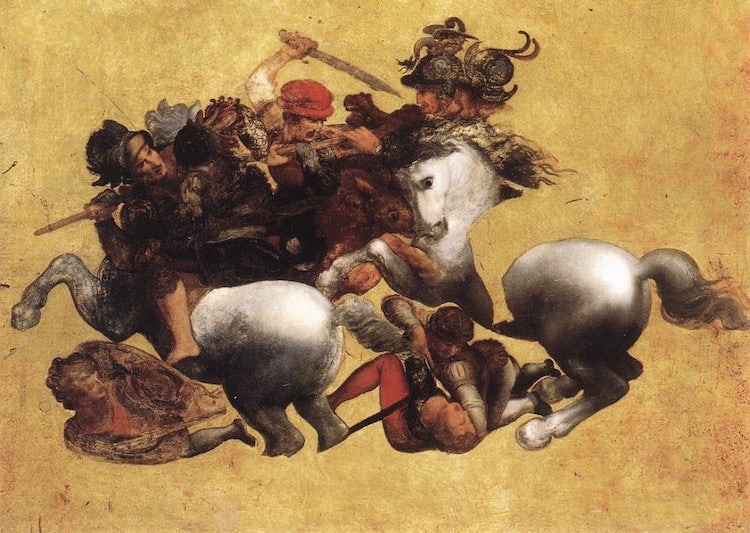 Many people speculated that Leonardo's fresco was still there in the Hall of Five Hundred underneath the modern paintings but with the imposing masterpiece by Vasari it was virtually impossible to confirm. It was Vasari who sent the clues of where to look!! In May 2007, upon the initiative of the Department for Conservation of the Cultural Heritage, a special "Commission for the Battle of Anghiari" was named to find out if Leonardo's fresco is underneath the Vasari paintings.

In 2012, under controversial circumstances, probes were drilled beneath the Vasari painting to discover what actually lied underneath. Following a “secret message” which Vasari seemed to embed in his work, they went looking for Leonardo. It appears that Vasari may have been loath to destroy the work of an artist he admired, so he built a protective wall and saved the original artwork before beginning his monumental piece.

The controversy prevails, and studies continue, but for now, we can only admire the copies which circulate of the work. 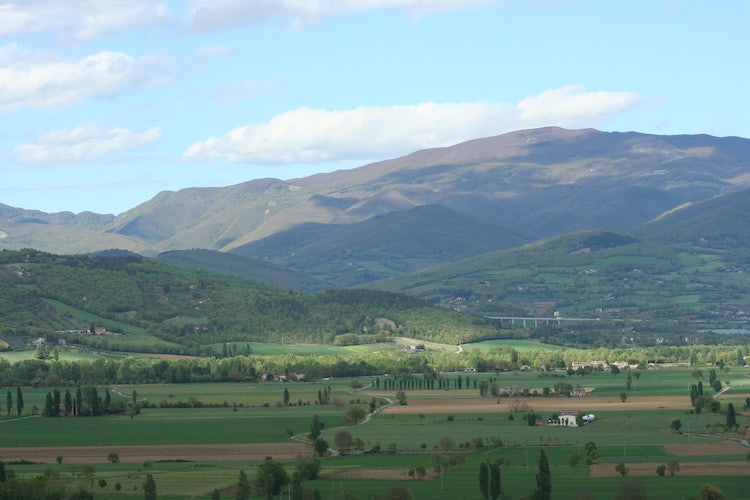