Perhaps nothing seems to identify Italy more than its culinary traditions which have been exported across the world for centuries. It is during the holidays that these traditions become even more pronounced and more defining, taking the natural ingredients around them and transforming them into a celebration.

It took a few years for me to get used to the “late” start to the holidays in Italy, but then it is definitely made up for it by three full weeks of celebrations. Everything starts on the 8th of December, and it seems there is a valid reason to be (and stay) at the table with family, and friends for a rich and hearty menu every other day up until the 6th of January! 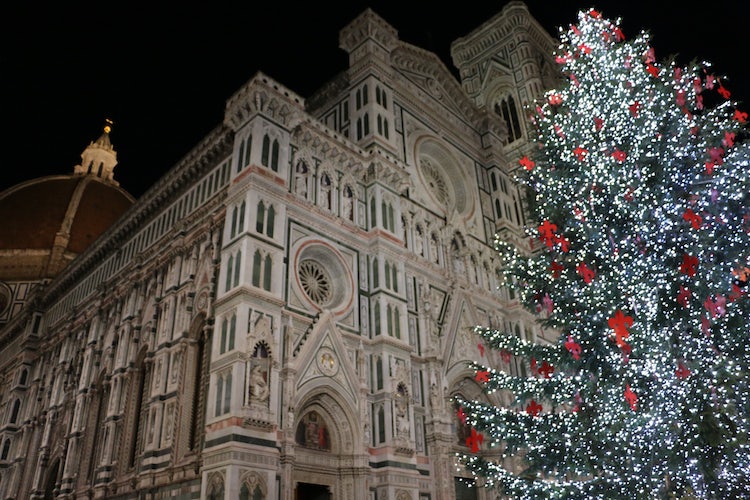 The 8th of December is the official beginning of the holiday season – at one time you didn't begin to decorate the city streets and store windows and you couldn't even find Christmas trees or even the typical Christmas desserts in the store until the 8th of December.

The holiday meals include Christmas Eve, Christmas Day and the 26th of December – Santo Stefano... three days in a row of culinary delights! Then a reprieve of 4 days before everyone is back at the table for the Cenone di Capo d'Anno – the “big dinner” for New Years Eve – many times based only on fish. This would then be followed by lunch on New Year's Day.

And then 5 days later the last event of the season, the Epiphany and the arrival of the Three Wise Men and for Italian children, the arrival of the Befana, an ugly old witch who would deliver holiday gifts. Even though she was a bit scary with her long nose and warts, the children awaited her arrival more than Babbo Natale (Santa Claus).

This signals the end of the season on the 6th of January. 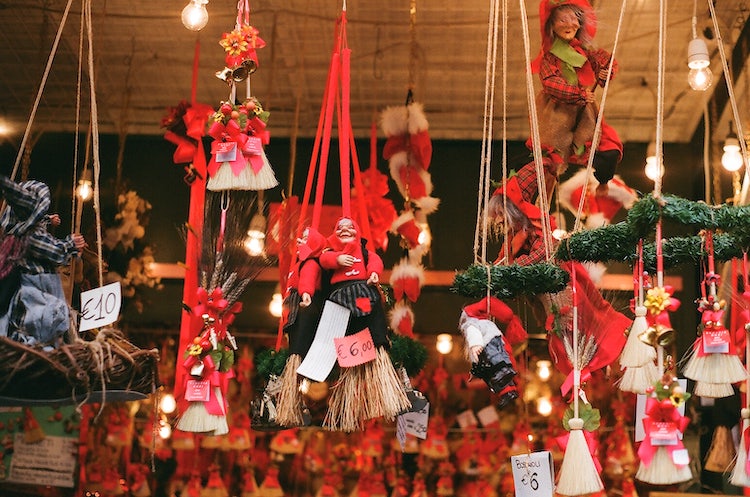 Some of these traditions are preserved in the local proverbs, such as “la cena delle sette cene” a feast so big and impressive that it seems as if it really a feast of 7 dinners all combined together. This took place on the 23rd of December, and consisted of precisely 7 courses (seven being a magical and mystical number), each, more rich and deluxe than the last.

Then there is Christmas Eve, where the saying is "Chi guasta la vigilia di Natale, corpo di lupo e anima di cane" which issues a curse on those who “mess up” this meal. It is also a meal traditionally served with no meat.

Then there is “l’Epifania tutte le feste si porta via!” which declares that with the 6th of January, the holidays are over with!

What Remains of Tradition

As I started to interrogate those around me as to their memories of the season, I saw a distinct division – they aren't divided by areas in Tuscany but rather by time. There are those before the early 1950's and those after. Those "before," seem to be more tied to local traditions like the fiaccole in the Abbey of San Salvatore (what we could possibly translate as the burning of the Yule log) or the fire in honor of San Geminaio in Pontremoli.

The traditions that have taken root recently are more signs of mass marketing, represendting an image of Italy that is more unified and homogeneous and a distinct sign of economic well-being. Of course, every family brings something special to the table, however if you were looking to create a traditional Tuscan meal there are some things that just can't be skipped on the menu.

Read on to know what you need to consider cooking this holiday season if you want to try something new and "Tuscan".

A typical and very Tuscan menu on Christmas day will start with the classic crostini neri (a liver pate spread on bread). The variations on this dish depend on family recipes, it may include a pure chicken liver composition or a mix of liver, spleen and more. Sometimes the bread is toasted, sometimes dipped in broth to soften it up a bit – and as Enrica told me, for special occasions her family would take the toasted bread and dip the crusty part in vin santo before spooning on the creamy liver spread.

And let's not forget, this is also the perfect time to show off the harvest, so a starter would also include an olive oil bruschetta. 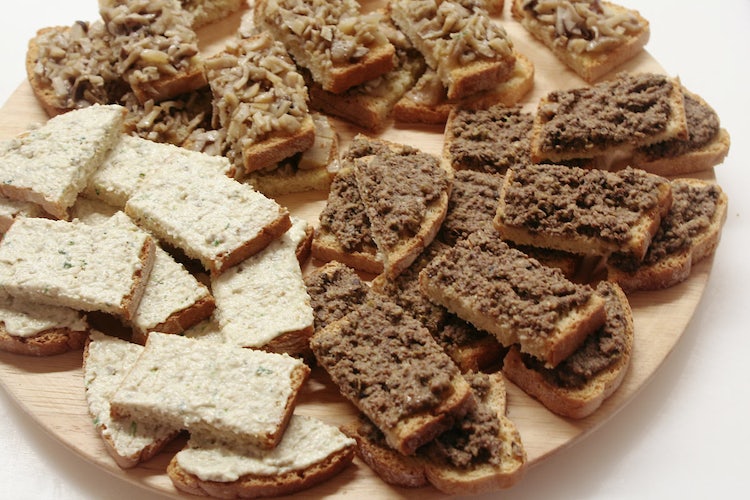 Rolling out the Homemade Pasta 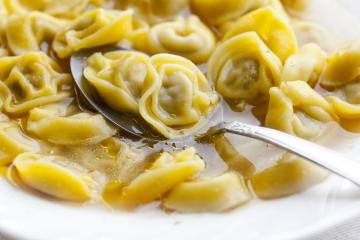 The pasta or first course is a rich broth, traditionally made from “cappone”, a chubby little rooster, grown especially for his rich flavor (capon). Today, most serve tortellini or cappelletti (the name literally means little hats!) in broth made with red meat – but as Vittorio, my 85 year old neighbor clarified,

Tortellini are a tradition from the Bologna area, not Tuscany. In Tuscany, in the past, they would have probably used tagliolini – or another small cut handmade pasta.

In Casentino, the broth was (and still is) made from a dish particular to Tuscany – collo ripieno or pollo in galentino. A labor-intensive dish where the skin of the chicken is filled with a mixture of tasty ingredients.  It is then boiled to create a savoury broth. The by-product is a type of boiled chicken meatloaf, often put on the table on the 26th of December (Santo Stefano). 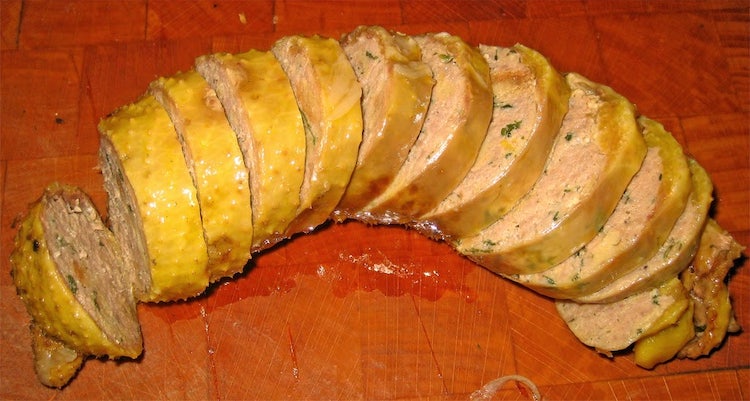 Main Course from the Oven

After the pasta, an arrosto or mixed roast meats flavored with rosemary, sage and garlic is placed on the table.

Chickens were once considered a luxury food - not like today where they are a dime a dozen, so the roast meat for the holidays almost always included pollo ruspante or a roast cappone– or a free range chicken

Sometimes instead of a chicken, it is a skinny little guy called the faraona. Or even more particular would be the tordo (thrush bird) – or piccione (dove), both of which are now a rare Tuscan treat for the holidays along with fegatelli, (pig liver). 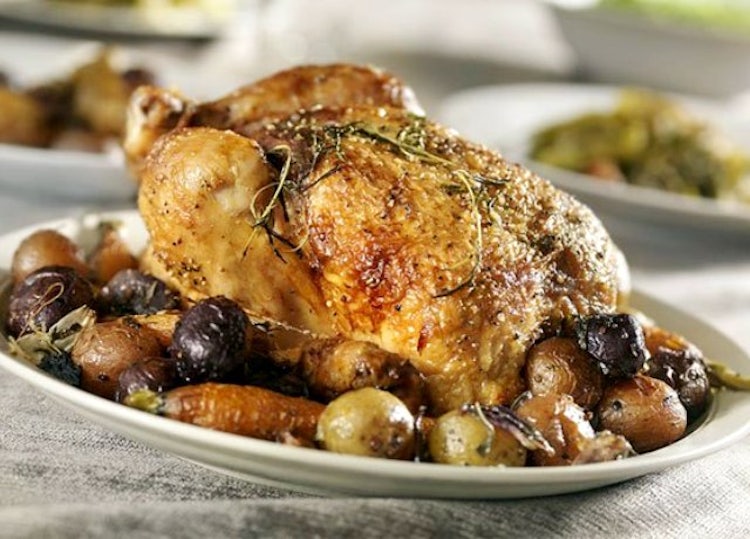 In Monte Amiata, they put lumacche on the menu – cooked snails while in Livorno, more so for Christmas Eve, you will find Cacciucco, a rich fish soup served over toasty pieces of bread. While you can find cacciucco year round in Livorno, the tradition has it that for holidays you use prized fish instead of the inexpensive leftovers that were normally used during the course of the year. 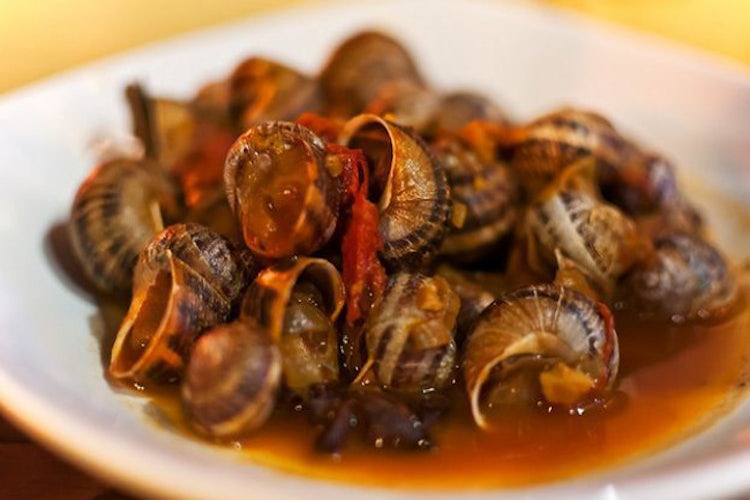 Veggies are an Afterthought

When a large meal like this is being planned in Tuscany, it seems that vegetables are optional even though there are many contorno (side dishes).

Rosemary and sage roasted potatoes are a favorite, and any chef will tell you that there never seems to be enough of these to go around… no matter how many potatoes you peel.

A simple green salad will always be prepared but in many cases with all the other savory flavours on the table, it normally never makes it to the table. Lisena from Chianti told me:

We would start cleaning off the table to bring in the desserts and someone would always say... oh no, we forgot to put the salad on the table!

Another standard dish is the sformato (vegetable flan), and to make it special for the holidays, they would use cardo (translastes into cardoon or wild artichokes), a prickly vegetable that require lots of time to prepare.

It's All About the Sweets

The real variation across time is in the desserts

Today, it would seem that all of Italy shares the same holiday desserts – however, that wasn't always the case. Desserts were a pure luxury and they were normally home baked treats. Panettone and Pandoro (and all their lovely variations) are what we find in the supermarket of Tuscany today but these are traditions which have their origins in the north of Italy - not Tuscany. 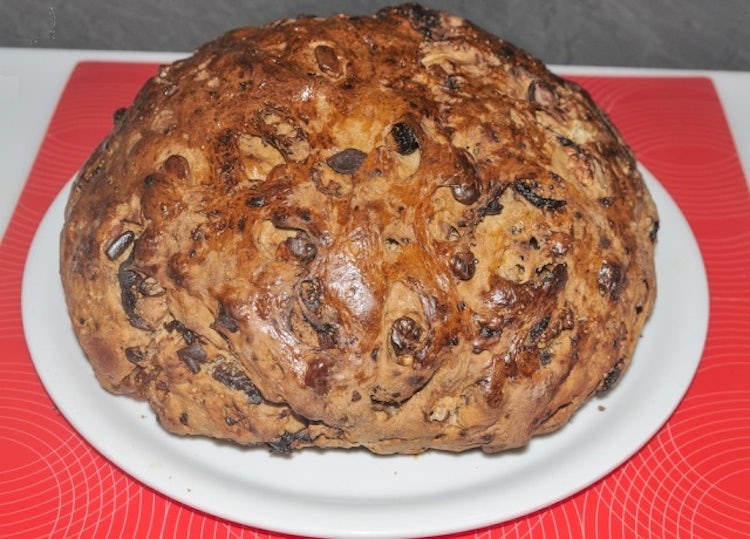 The regional sweets would highlight local ingredients (or the lack of). If you were to travel to Grosseto and area, you would find that Vecchiarelle were eaten on Christmas Eve – these would be boiled chestnuts, which are loaded with calories to add substance to the traditional menu with no meat.

And in the area of Porto S. Stefano, they bake a bread-like dessert filled with dried figs, raisins, pine nuts, walnuts and almonds called the Pagnottella di Natale. Just the use of the nuts made it a luxury.

In Monte Amiata, you will find la ricciolina, a pie like dessert filled with chocolate, nuts of all kinds, topped with meringue and more chocolate. 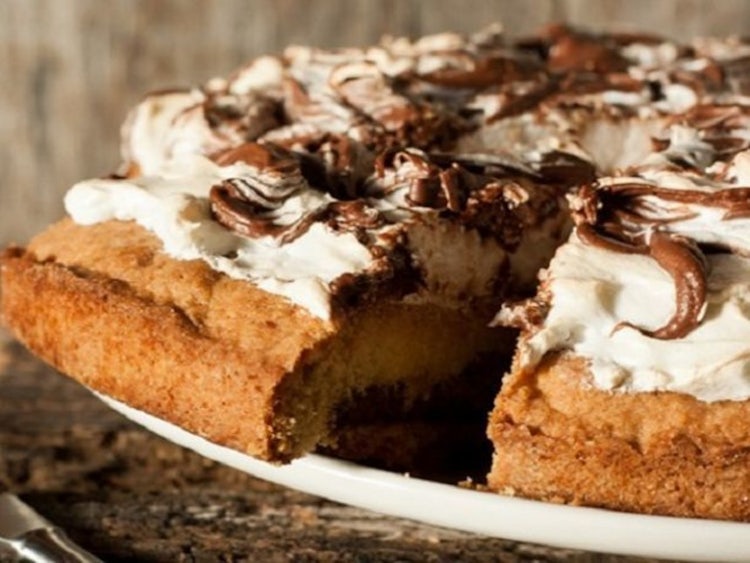 There are several treats which are practically a year-round symbol of Siena, however they were once closely associated with the holidays. These rich desserts include the panforte, a compact fruit cake with candied fruit and nuts, as well as the delicious ricciarelli, a cookie made with almond paste and sugar.

In the countryside throughout Tuscany, you will find the Cavalluccio, a chunky dry cookie with a strong anise flavor mixed with finely chopped dried nuts and candied fruit inside.

If you head towards Livorno, and the northern part of Tuscany, they have the Befannini, a rum flavored sugar cookie which were used as gifts between families, particularly for the 6th of January when the Befana (a witch) came to visit.

Of course, in Tuscany desserts were always served with a glass of home-made vin santo, the sweet wine made from dried grapes.

To read a more detailed accounts of the various holiday desserts across Tuscany, read this article on Christmas Tuscan sweets.

The End of a Good Meal

The last things to make it to the table were a sign of “benessere”, or wealth, and included a selection of what at one time were considered exotic fruits including dried fruit, nuts, dates and oranges. Roberto from the Arezzo area explained to me that the 25th o of December and the Christmas tree were not always part of their holiday celebrations, he remembers the celebration on the 6th of January being more important.

We didn't have 'real' Christmas decorations for the tree like today; we used to hang oranges and walnuts on the tree. And that was considered a special treat for us kids to be eaten later.

So with all of these ideas in mind, will you consider adding some of these treats or dishes to your holiday table this season? 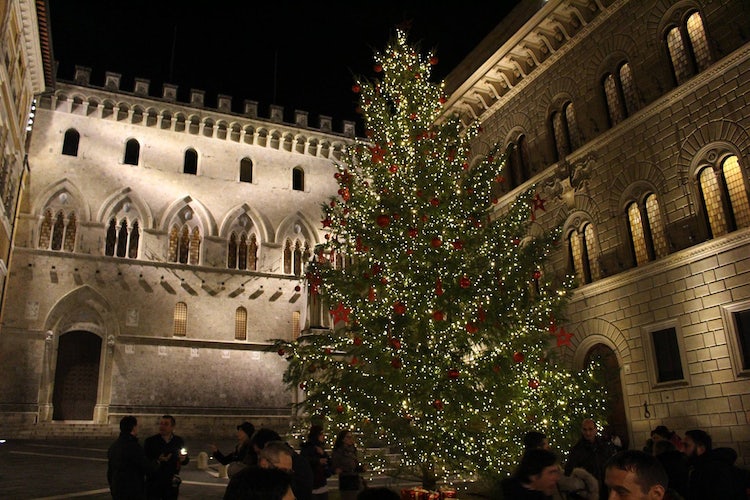